Google Maps says that if I walk for 30 minutes due southwest from my workplace in midtown Manhattan along Park Avenue, I shall reach Union Square. I generally manage the walk in 20 minutes.

It is a bracing walk in the evenings in summer and during the daytimes in winter. I mostly do it after the day’s work irrespective of the time of the year.

Walking the 25 odd streets arranged parallelly with a dictatorially comforting regularity gives me a feeling of accomplishment that I discovered is unique to New York’s pedestrian life. There is a simple satisfaction that I get crossing the streets that I do not get when walking across avenues. I’d rather walk 25 streets than 2 avenues.

Another reason I prefer this walk is its singular lack of any bends. I can wind up my body, adjust my clothes, straighten my back and place myself on the tarmac facing the right direction and I will be moving closer and closer to the distant destination marked by the sundial.

There are no bends. There is nothing that unduly distracts the mind.

But that does not mean there is nothing along the route. If you have ever walked that route, you will realize that it is rich in character. It is just that they settle into my consciousness without glare or glimmer. It is concrete haze that fills the eye without unsettling the mind.

Bounded on both ends of this journey are two landmarks. On the North East, at the head of the journey, is the Grand Central, and at the southern end is Union Square.

Union Square, with its insecurely frenetic energy, captures a certain throb of New York City that is kitschy, trashy, and aspirational. There are hippies offering free hugs and skateboarders whirring noisily and perilously falling off their boards without ever really colliding with anyone. There is the permanent contingency of Hare Rama followers whose eerie hypnotized chants mingle with the weedy atmosphere. There are the chess players arrayed in an arc, and if I cast my eyes through the pathway that they form, I am horrifyingly transfixed by the gradual, phased emergence of human bodies from the concrete pavement. These are the subway riders of New York’s vast subterranean locomotive entrails rising from their commutes onto street level.

It is a spot where I have planted myself in the chaos, to feel the cold tenderness of being part of an unheeding world.

Just a stone’s throw away from Union Square is the Strand.

It is easy to forget that the Strand is an independent bookstore. It is huge. They push their merchandise, have way too many tourists, run ostentatious sales, and scream big bookstore. But the truth remains that they are an independent, brick and mortar store in an increasingly online world. NYC sustains this business through the city’s sheer literary tradition (or so I would like to think).

I think I first visited the Strand sometime in 2014. Since then, I seem to have gained a fairly thorough knowledge of the bookstore’s layout in its first three floors. I have not made it into their rare books section yet, something that I hope to right soon.

How I thread my way through the store has evolved over time. For the first year, I remember spending my time in the excellently curated front portion of the store. The piles of books, the crowds of readers with their eager faces, the constant click-clack of the register reminding me of humans exchanging money for books, all made me linger there for long. Later, I found myself zigzagging through the inner bookshelves. The chaotic frenzy of consumerism is lessened among these stacks and the browsers generally seem those who are looking for specific titles or are a little more deliberate and methodical in their search for literature. Adults mentally sifting through what they want to read rather than mindlessly consume the closest and loudest book at hand  These stacks also have stepladders to reach up to the top of the shelves, an unintended sign that the further back in the store one goes, the more as an adult you are treated.

Soon I found myself again moving away from these and more into the political and history sections. These racks remind me of how I look. Hands behind my back, balding, fighting a losing battle against the bulge, poring over history and geography reference books to refine political views, fooling myself into somehow thinking I can consume enough of all this literature but always chickening out to the Asian section, and even then, within that, narrowing into the Indian section.

With whatever books I have picked from these sections I walk down into the cellar.

The cellar has gotten more crowded than when I first went down on the Strand. In 2014, it was colder, smelt different, had fewer curated tables and was considerably less staffed.

This is where the science books, the philosophy books, and other drier academic materials are stocked. I love to think of this underground level as the foundational principles on which the rest of the societal superstructure stands, the unseen, unsung giants of modern society.

The farther in I go, the more specialized the subjects get, till I find myself wandering alone in narrow nooks of yellowing pages of Macmillan and Cambridge publications. By now, I would have sufficiently been reduced to an alloyed state of ecstasy, anxiety, despair, and frustration. I realize how all these thoughts and ideas, immortalized in the form of books, are taking its toll on my psyche. I want to partake of all of them, be conversant enough to pick any book and know what it talks about, refute the arguments propounded that later history has proven wrong, supplement the theories, and in general become a savant. I start fearing why science sections are less crowded, neglected than the literary drivel pushed out overhead. I find the sped-up awareness of the extent of change in human existence, of the ideas that shaped human civilization’s steady but painful progress captured in books and now stacked spine to spine, from the time when I had entered the bookstore, create a sense of vertigo that I would not be around to witness more changes in the future. I find myself wishing for more time, for time to have existed longer in the past, for my lifetime to extend healthily enough to consume more. In that lonely cellar I enjoy being suffocated and crushed under the weight of collective human knowledge. 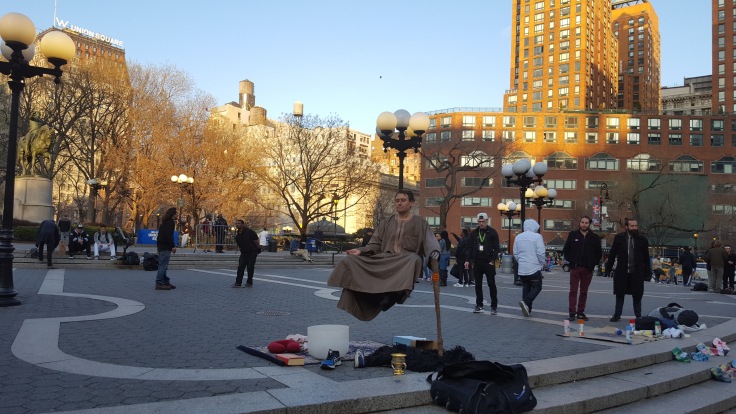 One thought on “Strand, Manhattan”