When I woke up that morning little did I imagine that the day would end in Amsterdam’s Chinatown with a lasciviously grinning man stroking my earlobes in front of my wife.

I had dreamt of a church the previous night. Maybe it was because Grotekerk was on my mind when I hit the bed. In the dream, I was walking alone inside the church, the whole prayer area echoing with the wooden clip-clop of my rubber soled sneaker.  The music started just as the alarm rang.

Needless to say I woke up in raptures. The day promised to be bountiful.

I walked to the church early in the morning to beat the crowd. It was empty as I stepped in. The vaulted ceilings were vertigo inducingly high. As I walked around on my rubber soled sneakers, to my incredulity, I could hear the clip-clop of wooden clogs. The organ started playing. For one heart stopping second I admit I was scared till I realized I was not alone in the church. An old volunteer was arranging wooden chairs for some ceremony and another withered human was tuning up the organ. Together they could have inadvertently killed me.

They smiled at me. With an ashen face I smiled back. 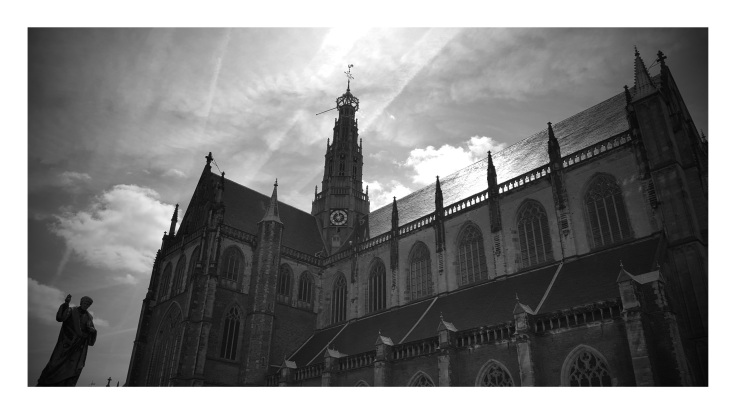 Grote Kerk in Haarlem was my church of choice.

The Rijkmuseum was all it promised to be. Efficient and elegant. A combination that always rouses my envy. It is a chronic problem that I am trying to rid myself of. A need to compare and bemoan India’s unkempt treasures in the hands of an impotent museum authority and an unheeding population. Netherlands did a god job of rubbing that fact in my face. Everywhere I turned there was enviable civic sense, apparent planning and sufficient adherence. Adherence not clinical, but convivial.

Ah well, one can’t have it all. We specialize in rape, I console myself.

The air was nipping cold and we were happy tourists. Later on, after the trip, when we were excitedly recounting our adventures to the elders over phone, we got finger wagged about how profligate we were to travel once every 3 years.

Ah well, we specialize in passive aggressiveness and conformity I would rationalize then.

In Amsterdam the sun was setting, the canals turning a volcanic red reflecting exquisite gables and steeples. The air was sweet with marijuana and the cyclists were pulling to the side to take in the scene.

The Man, N and I set out at night. The idea was to walk the famous flesh market of the world, Amsterdam’s Red Light District.

I hummed as I pulled my head through the sweater. It did not strike me odd that I did not have second thoughts about the whole venture.

We arrived at around 9. It was the best time we were assured.

N very soon was queasy. “They look like animals in a cage. I couldn’t help but think of them that way” she later said.

Earlier we realized that letting her walk in front allowed us men to freely ogle at the windows. The Man was jabbing me to point out a strikingly pretty lacy blonde who had caught his attention, but I was already visually probing the contours of a latexed brunette. When I remarked to my friend about how I thought she was trying to target one particular by-stander, and when he declined politely, she rejected another prospect, he just shrugged. This was work and she had the power to refuse.

I was reminded of a scene in a Laotian market, where a Frenchman was creating a commotion. A prostitute had chosen another man over him and he was demanding drunken justice. All the poor lady could do was hope the commotion did not scare the new customer away and cost her business and probably the wrath of a pimp. She was middle aged and looked like she needed the money. Her bad luck that two strangers were drunk enough to want to rent her that same afternoon.

That recollection made me smile as I watched the Dutch transaction that had just played out in front of me. At least this girl clocks in and out without much administrative overhead. As we turned the corner I saw a man slip out of a nearby window waving contently to two girls.

A bunch of loud american youths passed by. Then a quiet Indian couple with cameras slung around their necks, probably looking for Facebook fodder. Nikon his shining neck strap proudly proclaimed in yellow. Canon competed hers in red and white.

Apparently the street that we had turned into housed the most sought after women. Everyone valued real estate it seemed. The peripheral streets whet your appetite and the interiors lodged the finer wares. The Man was launching into a story about how he had brought many friends and shown them around, helped choose and wait in the corner till they returned.

The payback? A detailed story of the escapade.

I tore my eyes away from the prostitutes to the oglers. If I was one of those girls in the window, what I saw would not have inspired confidence. Married couples walking hand in hand, invariably one of them gripping the other’s hand a little too tightly seeking reassurance. Most looked like they were out to just watch and not engage. Single men with an expression similar to when solving mathematical problems. Probably trying to figure out how much is too much. Packs of young men trying to prove to their friends how good a time they can have. And the occasional serious shopper contemplating not for how much but how they want it.

The travails of being a marketer. Everything is a market.

N turned around and immediately I knew it was taking its toll on her. We marched out to find something to eat.

The only open establishments were Chinese and Turkish. Industrious races of men.

Over food, as we were noncommittally discussing our walk, the Man, sitting next to me, ran his finger over my ears, grinning, “So? Anything catch your eye?”

In us he wanted his story.

Avoiding his eyes I foraged for tofu in my plate.

7 thoughts on “At night with a man of questionable motives – Amsterdam : Day 3”